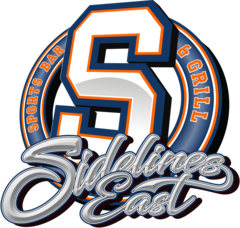 CALL US
Return to Main Menu

Sidelines Sports Bar & Grill of Millville, NJ is extremely proud of the success of our 2nd location, Sidelines East Sports Bar & Grill in Milmay, NJ.  Thank you Milmay, all the surrounding towns and Buena Vista Township for welcoming us into your community.

Sidelines East offers a place where family and friends can meet, a fresh, delicious menu and plenty of cold drinks.  We offer 12 beers on tap that are rotated to satisfy everyone’s taste and our weekly food specials are sure to please your palate!  Join us for all the broadcasts of your favorite sports teams on our 10 TV screens.

As of 2020, a new outside edition of Sidelines East was erected.  Dine under the pavilion and enjoy the outside!  The pavilion is equipped with fans and heat to keep you comfortable in any type of weather.  Stay tuned for even more renovations to the pavilion coming in 2022!

The property where Sidelines East sits has a bit of history.  Around 1890, the Milmay Hotel was built on this property by D.L. Risley, a developer from Philadelphia, and the South Jersey Land and Transportation Company.  The hotel was built at the same time of the building of the railroad through Milmay to the shore.

Around 1905, the property was acquired by the Waldek Corporation and the Milmay Hotel became their headquarters. Here Waldek started a large tobacco and licorice farm to give employment to the sons of the officials of the American Tobacco Company and American Telephone Company; allegedly in order to avoid the World War I draft.  Waldek Farms was ultimately unsuccessful and was dissolved after the war was over.

In 1923, the hotel was sold to William Oesterle, a former bartender from Gemany. Business was slow during Prohibition until Oesterle began making home-brewed beer.  The hotel became popular and famous for its fantastic, packed New Year's Eve celebrations.  The local kids would hunt for snappers in the swamps around Tuckahoe River and would get paid $.50-$1.00 each, depending on the size of the turtle, for Mrs. Oesterle’s fabulous real snapper soup.  The Oesterle’s ran the business successfully for many years until they eventually sold the hotel to a woman friend.

Around 1945, the hotel was then sold to Mickey Matwiow and Frank Krokos.  Frank Krokos served in World War II and later became Vice President of the Fire Company.  Mickey and Frank gave the Fire Company permission to install its first siren on top of the hotel.  Fire and emergency calls were received and alarms were sounded to the members and the community from that location.

Frank Krokos had bought the old Jupin family property on Cumberland Avenue next to the hotel before he went into the Army. When he was in Europe, he offered the use of the garage for the original Pumper fire truck, fire equipment as well as a place where meetings could be held in the early days before the Milmay Firehouse was erected.  The Pumper firetruck was housed in this garage until the end of 1948.  The garage was built by Mike and Joe Jupin in 1932 and still stands behind Sidelines East Sports Bar & Grill to this day.

Krokus operated the Milmay Hotel with his sister until October 16, 1969 when the hotel was gutted by a fire of unknown origin and the hotel was torn down.  There was no proof of arson.

In the late 1990’s a small bar known as the Milmay Tavern was established.  Milmay Tavern was the local watering hole for over 20 years until I purchased the property, renovated the building and opened the doors as Sidelines East Sports Bar & Grill on September 28, 2017.  Sidelines East is now a part of the history of the corner of Tuckahoe Road and Cumberland Avenue Milmay, NJ.  I look forward to offering a meeting place for this community for years to come.

When looking for a comfortable local spot for lunch or a night out, head to Sidelines East Sports Bar & Grill. We strive to provide excellent, friendly service and our staff is looking forward to serving you.  Come check us out soon for FOOD, FUN & SPORTS!